It’s April 18, 2022, tax filing deadline, and all those who prepare taxes for clients have been hard at work. So let’s do a little triage and review what absolutely has to been done today and what doesn’t have to be done today. And then at the end of the day, you’ll be able to sit back and think about all you’ve accomplished.

Hello again everybody, Tom O’Saben from the University of Illinois Tax School coming to you with our blog for… are you ready for this? April the 18th. Well, not quite time yet to take a deep breath, but think you might have this one lit. Let’s talk about what we need to do today before we can put a bow on the 2021 filing season.

What Is Due Today?

So in particular, let’s revisit what has to be done today. Well, we know that personal returns are due today, or we need to get those extensions filed. Remember that extensions are in time to file not in time to pay. If we have clients that want to fund an IRA for 2021 that’s also due today. HSA funding, we may have had an opportunity to talk with our clients who have HSAs that they could put additional funds into that HSA and treated for last year, that also has the personal due date to fund it for the previous year, which again, would be April 18th. If anyone answered the question that yes, they did, in fact, have foreign bank or investment accounts and they need to do FBAR reporting. That FBAR report or extension is also due today, Monday, April the 18th.

So let’s talk about what else is due today. Well, for the first time in several years, our first quarter estimated tax payments are also due today. And let’s not forget about those state payments, they would also have an April 18th due date. Next quarterly estimate date will be on June the 15th. Calendar year C Corporations also due today, trust returns, due today. So all of this combined due day comes back to what we were used to prior to the emergence of the pandemic. I want to bring your attention though, if we have S Corporations and partnerships, they were due on March 15th. So if they haven’t been filed yet, they’re late. And so if we didn’t get an extension filed by March 15th, for those calendar year S-Corps or partnerships, well, they’re late, we need to get those filed as soon as possible because the penalties are quite severe for late filing of these pass through entity type returns.

What Is Not Due Today?

So let’s talk about what’s not due today. If in fact we get that extension filed, say for a self employed person, and they want to make a Simplified Employee Pension contribution for 2021. They actually have until the due date of the tax return plus extension to get that contribution. And so they’ll have all the way up to October 15th to make the contribution and deduct it as a 2021 expense. Also, for those employer plans where we’re talking about employer match, the employer match is due by the due date of the tax return plus extension. So if we’re in the corporate world and we filed an extension back on March 15th, we have until September 15th to make that employer contribution still for 2021. And also other plans if they’re not an incorporated business would have that October 15th date to make that contribution on the employer side and still treat it as a 2021 contribution.

So as we’ve been mentioning, throughout this session, what does an extension accomplish? I think you know this, but I want to mention anyway, that we’re talking about it avoids the failure to file penalties, but any tax is due or not extended so failure to pay still applies. So if we can’t get the returns done, if your client can send some money in, they think they might owe some tax, you know, it’s not an issue if they don’t owe tax, but if they have tax that’s owed, then they need to go ahead and get some money submitted or they’re going to be subject to failure to pay penalties. So no sooner do we get the tax filing season done, then we’ll have to get after those extensions, especially situations like I mentioned earlier, where maybe an S Corp or a partnership is late. Or in fact that 1040 client owes tax that’s going to be important to consider.

An interesting tidbit that we’ve run into and sometimes if you’re like me, you go ahead and you get those returns filed as soon as you can. And we get them filed on the due date, which again will be Monday the 18th today, what happens with those returns get rejected? Are we are we out of luck? Are we late? Well, if you happen to look at IRS Publication 4163, I particularly draw your attention to page 48. That says that we have a 10 day transmission perfection period or five calendar days for rejected extension. It doesn’t apply to payments so the payment would have to have been postmarked by April 18th, but if the return would reject for whatever reason, then we do have 10 days to fix that. Remember again that we’re not talking about the payments. So a client has a payment due we’ve given them the voucher, they’ve gone ahead and mailed it in, or perhaps we put into our software to debit their bank account on the 18th. That’s all fine and dandy. We do have 10 days to fix a return that rejected, IRS has that original transmission date. So don’t think you can file one on April the 20th originally and think that it’s timely. No, it would have to be a situation where we filed an e-file to return by the 18th. And it was rejected for whatever administrative reason we’re gonna have to go in and fix it. So we do have 10 days to fix that, but still get those clients to have those payments postmarked. And we want to take them into their local post office and ask the person at the counter to stamp it so that it shows that it was postmarked April 18th. So we can avoid some of those penalties.

One thing I want to throw out to folks in Illinois and especially in my area, or perhaps anywhere in the country, you may want to check to see if clients in your county was in a federally declared disaster area. Where I live and work, Madison County, Illinois, was in fact a federally declared disaster because of a tornado that happened in late December of 2021. I’m not sharing that information with my clients so that they have longer to file. However, if for example, the Illinois Department of Revenue, or the IRS would like to propose that returns are late, then in fact, we have additional time because we’re located in a disaster area, you might want to check that out for your client as well.

So, at the end of the day what I want you to do is to take a deep breath, sit back and think about all that you’ve accomplished. And no sooner do we get done with this year, then we got to look towards planning, answering correspondence, and working with our clients for the future. So pat yourself on the back, you’ve made it. So from all of us here at the University of Illinois Tax School, this is Tom O’Saben saying we’ll say goodbye for just a while and congratulations on your accomplishments. 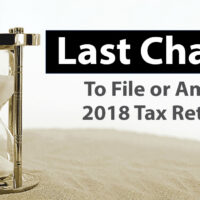 According to the IRS, there is $1.5 billion in unclaimed refunds for 2018 that will become the property of the United States government after April 18. At that time, 2018… 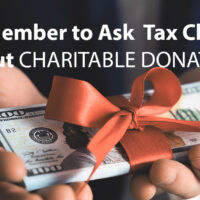 Nearly 90% of taxpayers today cannot itemize their deductions when filing their federal tax returns. But, thanks to recent legislation, taxpayers who can’t itemize but made charitable donations can increase…

Join 1,300 of your colleagues and get notified each time a new post is added.